#VIDEO: Caju by Joseph Hadad – what is the secret behind 5 years of success?

Since its opening in 2016, the brasserie Caju by Joseph Hadad, located near the Romanian Athenaeum in Bucharest, managed to remain in the top of the most appreciated locations in Bucharest. Five years after its launch, architect Victor Grosu and Chef Joseph Hadad discuss the ingredients behind the constant success of the restaurant. At the end, Joseph Hadad shares two essential pieces of advice for those who wish to open a restaurant and then reveals the future plans for the place.

„In my life, Caju is my heart” – Chef Joseph Hadad

Caju by Joseph Hadad – the success in numbers

The brasserie has 280 square meters and 59 places. The interior design process took 3 months and the investment was around 300.000 euros.

After the opening in 7 December 2016, the brasserie had an amazing start, and the revenues that month were 100.000 euro. The ascending trend continued in January and February 2017, difficult months in HoReCa, yet Caju had no break, maintaining a constant growth.

Even in 2020, a pandemic year, Caju had profit a maintained the same number of employees.

The launch of Caju by Joseph Hadad took place on 7 December 2016.

Joseph Hadad declares he felt the potential of the place from the first visit and, although everyone around tried to convince him not to invest so much there, he went further. He had already spoken with two different architects, but liked neither of their concept proposals, then he found on the internet the Grosu Art Studio office and was impressed by the first meeting with Victor Grosu:

„I told everyone, back then: an architect came to me, Victor, so young, and I liked his first question, What food will you serve? I will make the concept about the food.”

Joseph Hadad had planned to change the Athenaeum area with a casual restaurant, but with premium essences: it would have to be „a brasserie, a little bit gourmet, a little bit street-restaurant, everything together”.

„The concept was the following: Joseph brings his premium kitchen, close to Michelin stars, and lowers it a little bit, making it affordable for a wider public, but not very low, rather to a premium brasserie level. So a premium restaurant, signed by Joseph Hadad, but more affordable for the public. The design is upscale, which also is an ingredient for success. Premium food dining is not about quantity, but quality, feelings, taste buds, plating, it is an experience that we transferred in design”, Victor Grosu explains.

For Grosu Art Studio, the three months before the launch were extremely intense, as they delivered a turnkey project. Architect Adrian Ianculescu created the 3D renders in only five days, and Andrei Grosu managed the construction works. Grosu Art Studio was involved in every process, from planning to construction works and selection of the cutlery, tableware and table cloths.

November 2016 – the construction works were conducted on fast forward.

The lighting fixtures above the tables are from the Italian brand Karman, made of ceramic and metal, and have an industrial vibe.

Ingredient #2. Menu and branding: how do the Cashew nuts actually look like?!

The name, identity, branding, menu: as in the case of a food recipe, each and every ingredient contributes to the final flavour of a new restaurant, this is why Grosu Art Studio offers full services and takes care of each step:

„The Cashew (in Romanian, Caju) nuts have a fruit above, that inspired us to develop the logo and visual identity. The Caju fruit was transposed in a pastelled menu graphic.”, Victor Grosu says.

Few people know that the cashew nuts are, in fact, seeds of a pear-shaped fruit

As far as the menu is concerned, Joseph Hadad wanted to recreate the tastes of his childhood, with powerful North African influences. In order to be successful, the taste must remain constant: „When a plate is not as it should be, I throw it and it is made again. The same sauce, the same plating, the same quality and quantity, if not, you will lose. The client is not stupid, you may lie to him once, but the second, the third time, not.”

The graphic proposals are signed by architect Ana Maria Barbu, in charge of the Caju branding and visual identity

Victor Grosu confirms, as a regular customer of Caju: „The dishes are the same as in the first day, this is why you come back, to feel the same tastes, five years after, ten years after, they are stuck in your memory.”

The brasserie style is reflected also in the tableware, cutlery and packaging – every item was approved by Grosu Art Studio.

When Joseph Hadad opened Caju, he was not satisfied with the bread. Luckily, his mother was visiting Romania and he asked her the childhood recipe she was making back in Haifa. She tried it with different flour types, mixed three types and kept  experimenting. In order to reach the desired dough consistency, she used 80 kilograms of flour. 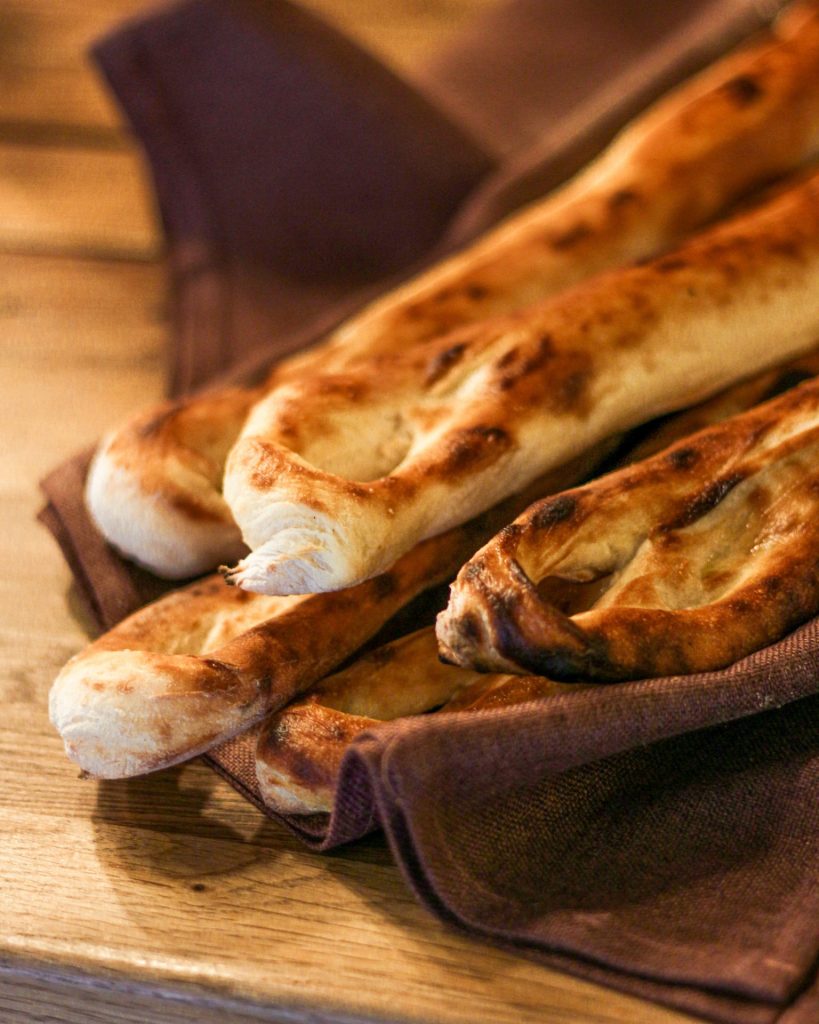 The Moroccan bread at Caju is every guest’s favourite.

„It’s a simple recipe, but it just didn’t come out right. The less humid the flour, the better. We have two people at Caju for bread preparation and each one’s hand is different, I can immediately feel who worked a particular day, even if I am not at work. There is an exact procedure”, Joseph Hadad tells.

In a restaurant, a dish like this one can make the diference:

„When I come here, I always tear a piece of hot bread: these types of anchors matter, if you are going to open a restaurant, look into your heart for that story and history that can bring someone everyday to say I want that bread, one more, please, can I order one more?”, Victor Grosu recommends.

Ingredient #3. 100% involvement: „My luck is that I am a Chef and I know the process behind”

Chef Joseph Hadad explains the success of the brasserie by his involvement in the business:

„If somebody believes, in Romania or anywhere in the world, that they can open a restaurant and, instead of caring for the business, they can walk away, not supervise the kitchen, they will not succeed. In order to have success, the owner must remain everyday at the location; I am lucky to be an owner and a Chef and to know everything: the food, the quality, the preparation, the taste, the merchandise, you must be everyday at the restaurant, this is why our customers are content – Hadad always maintains the standard.”

Chef Joseph Hadad is at the location everyday and takes care of every step: supplies, preparation, plating.

The Joseph Hadad signature is ensured through his daily attendance in the brasserie and his involvement in each process. In a restaurant business, you can quickly escalate, through massive publicity and influencer campaigns, but the clients will quickly notice the taste differences: „If you do not have a good chef, if you do not check the merchandise everyday, the kitchen, the client comes once, twice, but the seventh time they will feel it is not the same”, Joseph Hadad underlines.

Caju Brasserie can accommodate 59 people, and the average daily customer number is 180-185, therefore Caju sells every table two times, and in the weekend even three times. Per square meter, it is one of the most  successful locations in Romania.

Since the opening, around 60.000 people entered the restaurant annually, a total of 300.0000 in five years. 150-200.000 of these are loyal customers, who come daily for lunch and celebrate every birthday here.

„The loyal customers always receive something from our side, our waiters know them, know their exact preferences, how many ice cubes in what type of whiskey, we know everything, this is what top level means”, Joseph Hadad explains.

If the food is all right yet the service is not, the efforts are in vain, and the restaurant will be a failure. The customers at Caju book a table with two-three days in advance, which means they are content with both the food and the service.

If you plan to open a restaurant after the pandemic, Joseph Hadad advises you to avoid the high-class concepts, since this is a time with many deliveries. Choose a good concept, not sophisticated, rather casual food, not classic, because the concept that works worldwide now is not expensive, but affordable.

The second advice is to take care of your team, your employees, you can do nothing without them – a war needs the people in the army, not only the general. You are the winner if you take care of them.

The mistakes are unavoidable, and Joseph Hadad believes that „Every mistake must be immediately fixed. My father, also a Chef, used to say you can make five mistakes per day, but learn from them and not repeat them.”

Five years after the opening, Caju will extend, Joseph Hadad already rented a location behind that he will renovate with Grosu Art Studio:

„Every five years, you should make some updates, but keep the location vibe, the soul, not change it.”

If you enjoyed the information in this article, keep reading successful HoReCa stories and advice for a top business on our blog. If you are curious about the Caju Brasserie upgrade, follow us on Social Media and subscribe to the YouTube channel Victor Grosu.

Why do Restaurants Fail: 5 Mistakes that Make You Vulnerable to the Crisis